I enjoy working with distributed systems, and I also enjoy working with embedded devices and single-board computers, so I thought it would be fun to combine these interests and build a Kubernetes cluster using some Raspberry Pi computers. This seemed like a low-cost way to have an always-on cluster that can be used to learn more about Kubernetes, and distributed computing in general.

Here is a photo of the end result. 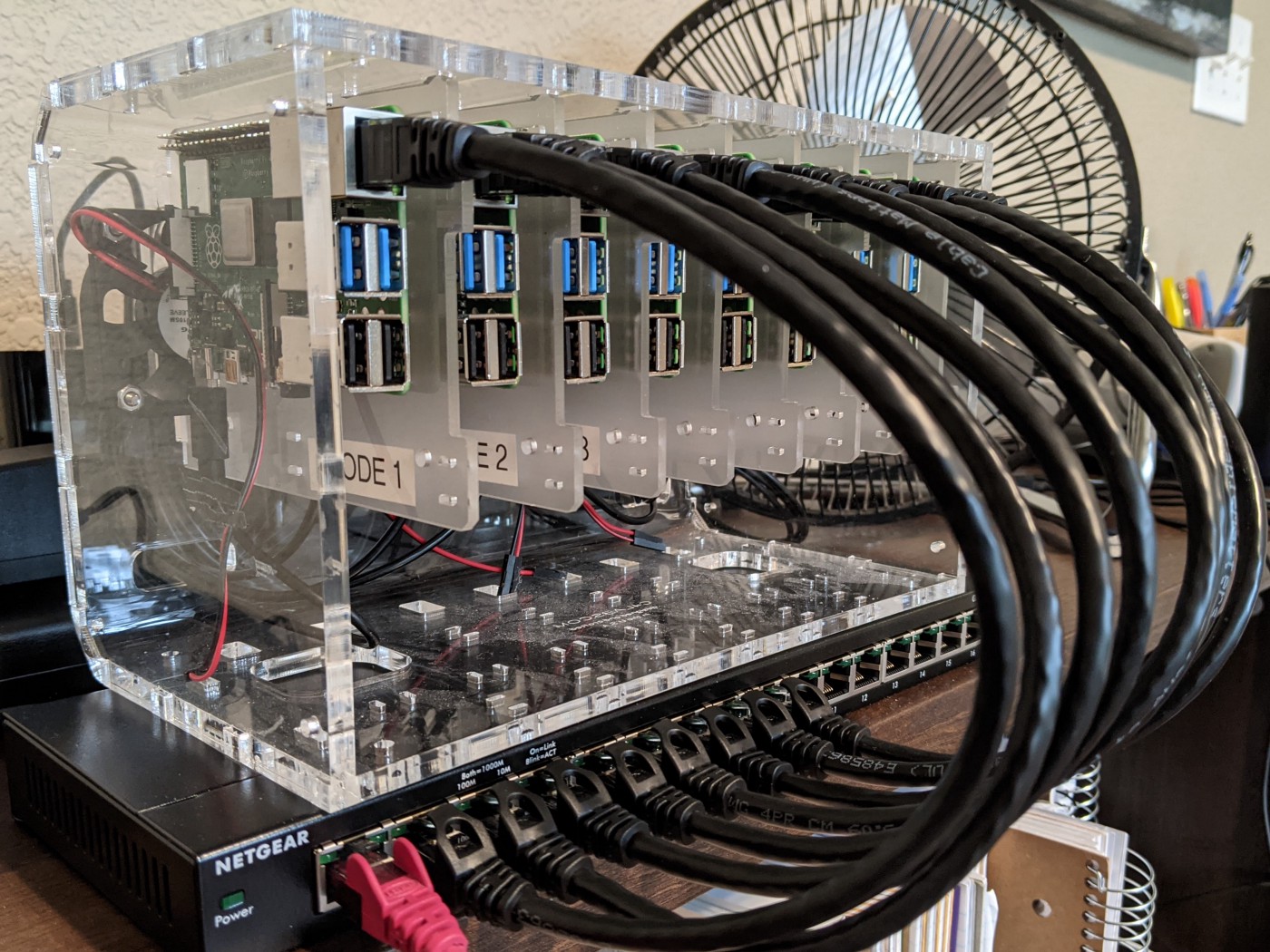 In this blog post, I provide full instructions, parts list, and costs, for anyone that wants to create their own low-cost cluster.

I will mostly be using my cluster to run benchmarks for DataFusion and Ballista, which are both part of the open-source Apache Arrow project. DataFusion is an in-memory query engine that can be embedded in other applications, and Ballista is a distributed query engine based on DataFusion. These projects are implemented in Rust, and it should be possible to optimize them so that they scale down well to environments with limited compute resource. There could be valid use cases for using DataFusion and Ballista in IoT devices and in edge computing.

I also enjoy testing the robustness of distributed systems in physical environments like this. Although you can use Chaos Monkey to simulate failures, it is really satisfying to physically disconnect network cables or remove power from nodes and see what happens. Maybe this is just me geeking out and of no real practical value, but I think it is important to have a bit of fun when you can. This is also great for live demos when we are back to attending meetups in person.

Single-board computers like the Raspberry Pi are sensitive to static and accidental shorting, so we need to mount them in some kind of enclosure. We also need to consider power and cooling. There are professional solutions available, such as blades that can be mounted in standard computer racks, but I was looking for a low cost and portable solution, so I chose the Cloudlet CASE for the enclosure. This is an acrylic kit that includes four small fans that are powered by the Pis.

We will also need a network switch to connect the Pis to. We will need to keep one port spare to connect this switch to a LAN (unless you plan on only accessing the cluster over Wi-Fi). I am using all 8 slots in the case, so I needed a network switch with more than 8 ports, and it was cheaper to buy this 16-port switch than any of the 9 or 10 port switches that I could find. It also provided a nice base for the cluster to sit on.

There are the parts that I used for my cluster, excluding the nodes. All prices are exclusive of tax and shipping.

There are the parts that I used for each node:

If we take advantage of all 8 slots in the case then we have a total cost of $838.41 for a cluster consisting of 32 cores, 32 GB RAM, and 512 GB disk space. Peak power consumption for this configuration would be 122.4 Watts. Alternatives

This approach of building a Kubernetes cluster is relatively low cost, but also has limited compute capabilities and very limited disk space and bandwidth (although it is possible to add NVMe storage via a USB adapter for around $60 per node).

Before deciding to replicate this project, you should look at other options to see what would work best for your use case. For example, I recently purchased a refurbished Proliant server from Amazon for less than $350 and this provides 12 physical cores with Hyper-Threading, resulting in 24 virtual cores. It also provides 64 GB RAM and 2.4 TB of HDD configured as a RAID array. It is also large and noisy and ideally should be mounted in a server rack. In a future blog post, I will show some comparisons of performance between these two environments.

Set up each Pi

Download the 64-bit server image of Ubuntu for Raspberry Pi and then follow the instructions for burning the downloaded image onto each SD card, booting each Pi and obtaining the IP address.

With the base operating system installed, and each Pi installed in the cluster, it is time to access the nodes from our desktop.

I ran sudo vi /etc/hosts and added the following lines. Obviously, your IP addresses will be different.

It is now possible to ssh into each pi by host name. For example, I can run ssh ubuntu@pi1 to connect to the first node.

By default, every Pi will have the hostname “ubuntu”. We will run into problems trying to add nodes to the Kubernetes cluster if all the nodes have the same name, so we need to change them.

Connect to each pi in turn using ssh and run sudo nano /etc/hostname and change the hostname from “ubuntu” to “pi1” for node 1, “pi2” for node 2, and so on, and then run sudo reboot to restart the Pi.

Before we set up the Kubernetes cluster, we will want to make sure that the IP addresses won’t change the next time we reboot the Pis, so it is important to login to your router/gateway and find the devices and change the configuration to use fixed IP address (using the current addresses) rather than using DHCP.

If you don’t already have an SSH key set up then you can create one with the following command on Linux:

Use the ssh-copy-id utility to copy this key to each node. For example, here is the command to copy the key to node 1.

It should now be possible to ssh into each node without using a password.

This is a good time to connect to each Pi in turn using ssh and run the following commands to update to the latest patches.

Run sudo nano /boot/firmware/cmdline.txt and add the following options to the start of the line:

On my setup, the line looked like this after adding the new attributes.

Once the file has been updated, run sudo reboot to restart the Pi.

Wait a couple of minutes for the Pi to reboot and then connect again with ssh and run the following commands to install MicroK8s.

The permissions don’t take effect until logging out and logging back, so type exit to end the session and then connect again with ssh.

Add nodes to the cluster

For each node (except for pi1) we need to generate a token on the controller node (pi1) and then run a command on the node to be added.

For each node to be added, run microk8s.add-node on pi1. This will show output similar to:

From the node you wish to join to this cluster, run the following:

From the node to be added, run the suggested command. You should see output similar to:

These commands take quite a while to run. I didn’t time it, but it felt like a couple of minutes.

Once this completes, run the following command on pi1 to confirm that the node has been added:

Repeat this process for each node to be added.

In my case, the final output looked like this:

We now have a fully functioning Kubernetes cluster! The next step is to find something fun to run on it. I will post a follow-on blog post in the next few weeks once I have some results to share.


Want to learn more about query engines? Check out my book "How Query Engines Work".